The app is organized in four panels: a table summary of current NHL team power rankings, odds of reaching the playoffs and advancing in the postseason, historical ELO ratings for every current and former NHL team, and an About page explaining the nuances of the data.

Creating a visually appealing web app in the style of FiveThirtyEight, rather than focusing on interactivity, was the top priority.

Full Description: How this works

Based on Neil Paine's Elo Ratings model at FiveThirtyEight.com

According to Paine, the playoff odds used in his model are derived by using Elo ratings to simulate the remainder of the NHL schedule 1,000 times. In addition, “simulations are run using the 2021 NHL season structure, with the assumption that teams with fewer than 56 games will be ranked and seeded according to Points Percentage. In the Stanley Cup Semifinals, the winners of each division bracket are re-seeded by regular-season points percentage with wins (per game) as the tie-breaker.”

The Elo rating system is a method for calculating the relative skill levels of players (or teams in this case) in zero-sum games like hockey, according to Wikipedia. It is named after its creator Arpad Elo, a Hungarian-American physics professor, who developed it to rate the relative strength of chess players.

Elo ratings measure a team's strength over time, accounting for the strength of opponents, locations of games and margin of victory. In hockey an Elo rating of about 1500 is considered average. Ratings update after each game in proportion to both how unlikely the result is and the margin of victory.

The data comes from Neil Paine's Github repository, and is refreshed once per day. 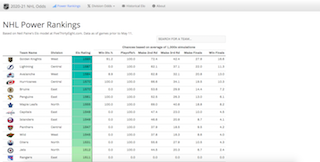