Hi, I posted my problem with the devtools::build_manual() command already a while ago; cf. R 4.2.0: devtools::build_manual() fails. Unfortunately, the problem (which was not there for me in the past) persists. Here's my reprex (remark: running devtools::check() beforehand indicated everything to be fine with my R package). Would anyone have any suggestions for me, please? Many thanks. 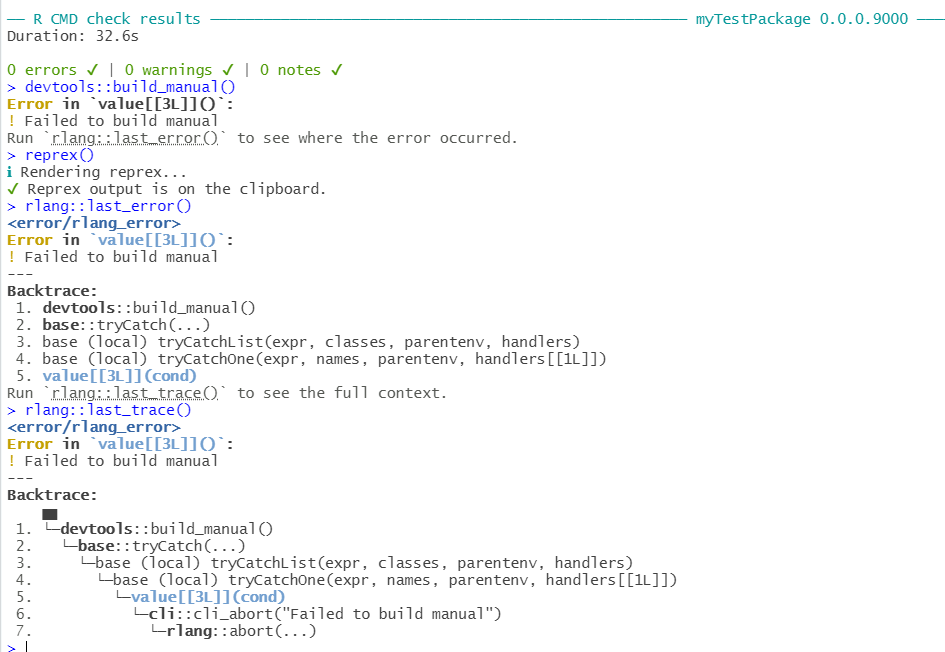 You need to show us a reproducible example, e.g. your package that fails if it is open source.

Hmmmh, I am confused, sorry. How could I possibly make my test package "myTestPackage", which contains a single function (and works perfectly fine), available to you? Post all the source files, DESCRIPTION, NAMESPACE and functions.R, here in this forum? Any help appreciated. Many thanks.

You can put it in a public GitHub or GitLab repository. You can also create a .tar.gz or .zip file for it and upload it to any file sharing service. Or you could write an R script that creates it and share the script here.

I had a similar problem and wanted to share my solution in case I can save anyone time. I was getting the exact same error as in this post when running devtools::build_manual(). Running the following line fixed the issue:

Details and Example
I could reproduce the error with the following steps. I am on Ubuntu 20.04 LTS and had this error with several versions of R including 3.6.3 and 4.2.2.

This took a long while to fix because the error message was not informative. devtools::check(), build(), and document() all worked fine. devtools::check_man() returned "No issues detected". I installed tinytex and made sure tinytex::is_tinytex() returned TRUE. I could not find any informative errors anywhere.

Eventually I noticed that Sys.which("makeindex") returned only "". That is when I tried tinytex::tlmgr_install("makeindex"), and after running that, the build_manual() succeeds.

This topic was automatically closed after 45 days. New replies are no longer allowed.