Hi there, I am doing my Bachelors Degree and I explore six varibales of one leadership model on the variable job staisfaction. So I did Spearman Correlation which were all high significant, I did an lineare regression each which made sense and in the end I did a multiple regression. At the multiple regression I explored every variable of the leadership model on the variable Job satisfaction and the conclusion is that only one of the six variables has a high significant effect on the job satisfaction. How should i interpretate that? Until now I said something like it is normal, bc the variables od leadership correlate among themselves, but I also said that we need more studys about it to see if only that one variable of the leadership model have an effect or all the variables. Is that right or do I interpretate wrong? 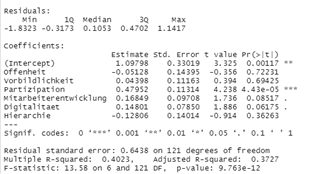 It is certainly possible that when measuring the individual relationship between leadership and digitalitaet individually, there is a significant correlation, but in a model that also includes partizipation, the relationship is not significant.

Some of the work you can do is to measure the correlation coefficients between all your variables, and compute the VIF for all your predictor variables (with the car or usdm packages) to diagnose the multicollinearity. Multicollinearity is one of the most common things that creates problems for linear regression, and VIF is a common diagnostic.

I do not understand why you would do this. As @ arthur.t says

the regression incorporates the effect of all your predictor variables simultaneously

which seems like what you would want to do, I suppose, without knowing more about the study design. I do not understand why the individual linear regressions.

I think you may need to consult with a local statistician/methodologist in your institution to discuss the analysis plan.

I did it bc I have hypothesis for each dimension and I thought it would make sense to end my interpretation by explore the whole model with a multiple regression. @arthur.t you were right. "Partizipation" highly correlates with all the other dimensions. Thank you very much!