Abstract: This Shiny App lets you explore an extract of the Steam games database (until late 2020) to find out the best rated games, the most consistent publishers, and visualize how developers and publishers interact with each other using a network visualization. You can also find out specific detailed information for each game listed in the dataset as this application interfaces with the Steam API to fetch description and metadata.

Full Description: Steam is a great place to find games... and data about games. As I happen to be both a gamer and in love with data analysis, it did not take me very long to select this project for the Shiny competition: to analyze an extract (up until about September 2020) of the Steam database available on Kaggle. While it should be considered a sample of the real true Steam data, it's still massively useful to discover many insights about the world of games. In this Shiny application, I have separated everything into tabs so that you can look at the data using different tools and filters.

The overall page starts with 3 charts showing how fast Steam has been growing in terms of sheer number of games, as well as the split in genres and how many VR games happen to be part of this. I'm very interested in VR, but as you will see from the data, there's no gold rush happening with VR titles as of now: the market is too small and did not reach a critical size yet. We can also see that single-player games still make the bulk of the games released on Steam.

The next tab, that I called best games is a pre-selection of the best titles found in the dataset, based on the distribution of positive reviews. It's sorted to start by the most recent games that fit that criteria, but you can use filters to modify pricing, years, and categories (online, single-player) - I hope it will be useful for some of you to discover some great titles you may have missed.

Next, the pricing tab looks at how prices have changes in the past 5 years on Steam - they look stable at first, but once we split them in price tiers, we see that there's more to the story than just "stable prices". I will let you discover that.

The Long tail tab that follows is a way to visualize the recent interest in older titles (as in, titles released many many years ago) based on the number of reviews left in the past 30 days, and the percentage of positive ratings of such reviews. This is an interactive chart, so clicking on one game will provide more information about that title. you can use it to discover really old gems that still stand the test of time. It's no surprise that Ultimate Doom (1995) still receives 97% of positive ratings (on 201 reviews): it's aged, but it's as fun as ever.

Now, looking at the Developers tab, you can look at developers to see how many games they have released, what kind of positioning they go for: do they focus on Free-to-Play games? Do they go for highly-priced titles? Do they like to release many DLCs? For developers who managed to release anything remotely popular, you can also find one representative title they are known for. I love Paradox Games, but they sell games for the purpose of releasing more content as DLCs afterwards: 152 DLCs for 17 titles... A very clear business strategy.

Let's not forget Publishers! In this tab you can find if publishers are merely lucky in their choices of games, by using the consistency metric: the higher the score, the most consistent ratings they get across all of their games. I have also added a popularity filter, based on the number of reviews received across all of their published games: you can expect that a low popularity score hints at published games that have a niche audience, while high popularity scores are very likely to be mainstream. Sekai Project with a Popularity index of 3, makes great games but they are Visual Novels that don't go too much beyond anime-fans. On the other hand, CD projekt Red (Popularity index 9) with its Witcher series, has managed to reach the hearts of gamers across the world.

We're almost finished. The Pub-Dev network tab is all about exploring the connections between publishers and developers (for creators who go through publishers! Not everyone does...). This is a good way to illustrate that there is some heavy concentration going on with publishers like SEGA, Ubisoft or THQ Nordic which centralize the work of numerous developers. Clicking on a publisher or a developer on the network will let you discover more about their own history on the sidebar. Do you know that Obsidian Entertainment has kept switching publishers for almost every game they have developed? You will also be able to understand that some publishers are generalists and publish pretty much any kind of game, while others focus on a specific genre title after title.

The last tab, Game Search, makes use of the Steam API to pull data from any of the ~30000 games included in the analysis. You can either select a game from the very long dropdown list, or enter the game name by yourself: don't worry, it has autocompletion!

I hope you will enjoy this Shiny App as much as I enjoyed developing it!

You can find additional information about this application in the README of the git repository: https://gitlab.com/rg2000/steam-explorer 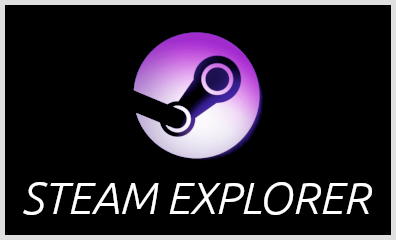