I wish to plot 7 barcharts next to each other using a ggplot2 facet grid (I believe this to be correct).

I have managed to come up with a solution by utilising the grid.arrange package, however the code is bloated and repeats itself:

This code produces 7 separate barcharts and places them in a 2 x 4 grid.

As mentioned, this code seems far from efficient.

I have tried playing around with ggplot2 facet_grid but I can't seem to get it to work how I want. As all the online videos/forum posts state that you need to define x/y. But I want the Y axis to be the count of each column and X to be going from 1 to 7, as per the ranking (In my data, the numbers represent ordinal data. As each var was ranked against the other, with 1 being the highest)

The following produces one barchart:

I understand this is due to only specifying one column, however I'm not sure how to add the other columns so it produces multiple charts. Also, I have no clue what I would put in the facet_grid() argument.

Example of my data: 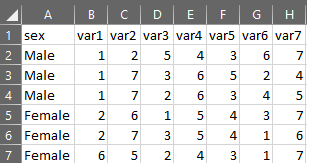 In my data, the numbers represent ordinal data. As each var was ranked against the other, with 1 being the highest.

"sex" is in there, however I do not want to use that in the facet_grid() argument. It can be ignored.

Apologies if I'm just completely misunderstanding things, I just feel at a loss after hours of trying to get this to work.

For face_grid() to work you need to reshape your data frame into a long format, you dan do it with the tidyr::pivot_longer() function. 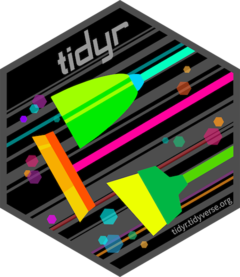 Ah I can't thank you enough! It's been about 3 years since I've done any analysis, so I'm slowly brushing the dust off.

For reference, the following code worked for me: